The Paul Eliadis Collection of Contemporary Art was established as a private holding in 1989, motivated by a curiosity toward the art of our time, an artist’s role in the community, and a personal aspiration, revealed in the quote to the right, to seek beauty and understanding amid complex human endeavour.
The Collection was initially focused on painting by Australian artists made from 1960 to the present. Since then it has held and gifted works by a core group of artists, including Ian Burn, Gordon Bennett, Juan Davila, Imants Tillers, Tracey Moffatt, Jon Cattapan, Scott Redford, and leading Indigenous artists such as Turkey Tolson Tjupurrula (Papunya), Maggie Watson Napangardi (Yuendumu) and Emily Kame Kngwarreye (Utopia). 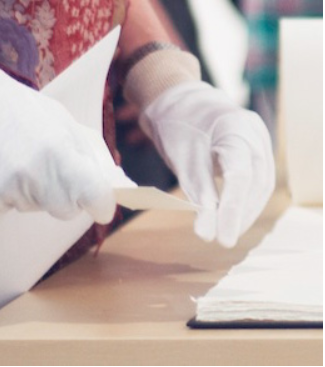 “A beautiful work of art draws us near to itself. It is only after this initial attraction that I may be fortunate to understand the work more profoundly
or intellectually. To understand a great work of art may take a long time. Complete understanding may remain elusive forever”.

The Collection evolved further, from 2010, to include works by selected international artists, such as Ed Ruscha (USA) and Gonkar Gyatso (Tibet/USA/UK) and recently shifted emphasis again, to include provision of major patron support for artist projects and targeted philanthropic outcomes.

Over 150 works from the collection have been gifted to public institutions in Queensland via the Commonwealth Government’s Cultural Gifts Program, with major beneficiaries including The Griffith University Art Collection and Queensland Art Gallery / Gallery of Modern Art. Dr Eliadis has selected Australia’s recurring representation at the Venice Biennale to target his support for artist projects, and has been a donor to several Biennale projects through the Australia Council’s Venice Champions Program. He was also a donor in support of the redesign and rebuild of the Australian pavilion on the grounds of the Giardini, which opened in 2015 with Fiona Hall’s installation, whilst serving on the 56th Venice Biennale Commissioner’s Council under Chair, Simon Mordant AM. For the upcoming 57th Venice Biennale, to be held in 2017, he will again represent Queensland on the Commissioner’s Council under Naomi Milgrom AO, in support of Tracey Moffatt’s representation. For his dedication and services to philanthropy in support of contemporary art in Australia, Dr Eliadis was awarded Honoris Causa, an Honorary Doctorate by Griffith University, in 2008.

The initial attraction for Dr Eliadis towards a work of art has always been aesthetic. As he stated in his Honoris Causa acceptance address, “this attraction is nothing unique, it is what drives us all. We are all attracted by beautiful things”. Many years ago, well before he began collecting art, he first became interested in the Ancient Greeks. One author, Professor Kitto, characterised them as lovers of beauty and lovers of freedom. At the time, Dr Eliadis did not realise how personally relevent Professor Kitto’s proclamation was going to become. It was only later that he came to appreciate that to be a ΦΙΛΟΚΑΛΟΣ or ‘lover of beauty’, was a basic tenet for a civilised and meaningful life.

Dr Eliadis is committed to ensuring patients with malignant disease receive the highest quality treatment and care within the day hospital setting of Icon Cancer Care.

🏅 Congratulations to Dr Paul Eliadis, who has been recognised as UQ Alumnus of the Year: https://t.co/tBOiOVZdxn #uqalumni pic.twitter.com/pJo9YJGFQq

Incredible morning announcing the gifting of the @eastonpearson archive by Dr Paul Eliadis, to @museumofbrisbane 👏👏👏 pic.twitter.com/RVJhLolkA5